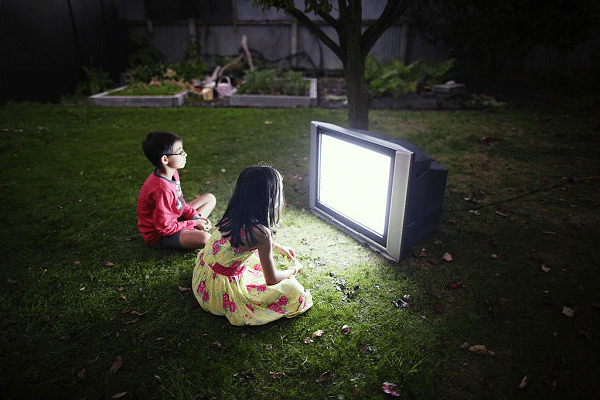 Television is one of the major sources of recreation and entertainment in the world that we live in. It’s such an integral part of our daily routine that we may not even be able to imagine our lives without it. Television is the most preferred choice of media used by people of all age groups and by people from all walks of life. Not only is it a source of entertainment but also a means to gather information.

Studies reveal that on average an adult spends around 4 hours of the day watching television and although the statistics are a little lower in children, a rapid increase has been seen over the past few years. It’s a normal habit for us to leave the television on while we’re engaged in some other activity so we are watching television either directly or indirectly. Although, we cannot ignore the fact that T.V. offers many interesting features and has a wide range of purposes, there are some limitations to its use and when we talk about the health of children, T.V poses a major harm to not only the health of your kid but their development and behavior as well.

It’s a fact that television is accessible to every household and even toddlers are very well trained in operating the remotes of T.V. However, this becomes the responsibility of the parents to limit the use of T.V. amongst children and to engage them in other healthy activities. Surely, the advertising agencies have successfully fooled us into believing that watching certain T.V. shows can have positive effect on child’s behavior and they might not be completely wrong as long as kids are watching programs that are age appropriate and are viewed under an adult supervision. Still, it cannot be ignored that excessive T.V. is extremely deleterious to a child’s mental development. In fact, the pediatricians believe that it’s an absolutely bad idea for kids less than 18 months to watch T.V. at all.

Why Should Kids Avoid Watching T.V?

Doctors believe that even though kids under the age of 18 months might seem to enjoy watching T.V. screens for the sake of bright lights and colors, their brains are incapable of interpreting all that information. The effects on their cognitive development include

Neuroscientists in Japan have done extensive studies on children aged 5 to 18 and come to the conclusion that there is a direct relationship between the number of hours spent watching television and changes in the brain’s anatomical structure. The parts of the brain that have been altered are the ones which control our emotions such as aggression and arousal and the part associated with vision. Moreover, it has also been postulated that in the hours spent watching T.V., the IQ level is lowered; both verbal and performance.

Basically, the time that is spent watching T.V. is the time that could have been utilized in doing healthier activities such as playing with other kids outdoor or reading a book or listening to a story from another family member or observing the behavior of people around. The latter activities are designed for better development of brain and behavior of a child as they unconsciously teach a child about day to day interactions.

Another setback that not only has an influence on children but all age groups is that the television is a major source of electromagnetic radiation. Through the advancements in technology, these low-frequency radiations have been minimized but not completely eliminated. Sitting too close may cause eye strain and fatigue. EMF causes damage to the pineal gland which controls the balance of hormones in the body especially the melatonin hormone. Disturbance in this hormone causes fatigue and change in the sleep cycle. EMF has also been associated with cancers as it alters cell growth and lowers the immune response. Further deleterious effects of EMF include muscle tension and stress.

Increased amounts of time spent watching television is a leading cause of obesity amongst the younger population. This obesity is then the causative factor of type 2 diabetes and hypertension as the person ages. Eye sight is also affected due to constant staring at bright lights. Dryness of eyes and fatigue is also experienced temporarily.

It is extremely important that parents sit with their kids while they watch T.V. and make sure the shows or cartoons that are watching are not promoting hate, aggression or violence. Even if they are and your child insists on watching such shows then it is important that you discuss with them and ask their views about it and counsel them that such behavior is inappropriate and undesirable and try to show them both aspects of the story.

As parents and caregivers, it is our responsibility to understand what hazards excess T.V. use poses and thus we should try to eliminate or at least minimize these detrimental effects simply by limiting the use of watching T.V. to an hour per day. Secondly, content matters so try to make sure that your kids watch those shows that are both interesting and informative, in terms of language, behavior, and morality. The shows that you watch together can later be discussed and a connection with real world can be made. This will also enable a child to think critically.

Furthermore, try to be more interactive with your child; playing in a park, exercising, telling a story, sharing jokes and exchanging experiences are some of the ways of keeping them interested. It’s always a good idea to explore new things with them and try new activities. Make sure your child sits at a safe distance from the T.V. screen to prevent hazards from EMF radiation. The larger the size of the screen the farther away from it you should sit.

Summarizing it all, we can conclude that no doubt television is a multipurpose media and has its benefits but the undesirable effects cannot be ignored. Thus, it is wise to teach children to spend lesser time watching television and if they do watch T.V., the shows should be appropriate for them for the sake their mental and social success.

10 Must Have Essential Oils For Parents